After work on Friday, Nick and I went to Cafe Habana down in Soho.  We went here primarily for the grilled Mexican-style corn – coated in creamy mayo, rolled in cojita cheese, and sprinkled with chili powder: 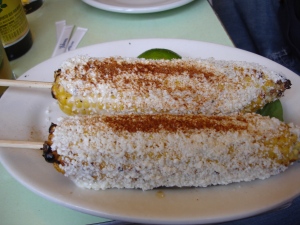 The corn met all of my expectations, and at $4.25 for two pieces, it’s a great cheap eat to share.

Since we saved on the appetizer, we splurged on some drinks.  A Mojito for me and a Pacifico for Nick:

The brownish color of the Mojito is due to the face that they use brown sugar instead of white.  So good I had two.

For dinner I had the Camarones al Ajillo with black beans and yellow rice:

And Nick had the gluten-filled Cuban sandwich and fries:

He says, “It was alright.”  I wouldn’t know, but it doesn’t seem like I was missing much.  One point for the non-gluten eaters of the world.