A while back when I was home in Michigan for the weekend, I picked up a bag of maple pancake mix by Breads From Anna. Yes, mostly because it had my name on the package, but also maple pancakes sounded awesome.

This mix is really unique because it doesn’t have corn, rice, or almond flour in it. It’s first ingredient is tapioca starch, but it also has arrowroot powder, millet flour, chia flour, pinto and navy bean flour, and chickpea flour.

I made the batter as directed, but it was super thick. So I kept adding milk to thin it out, but it seemed to never get to a good pancake batter consistency. I must have added double the milk and it still was like a muffin batter.

They also didn’t get very fluffy, they were more like flatjacks than flapjacks (heehee). Once I put some pumpkin and cinnamon in and topped with maple sugar they were alright. 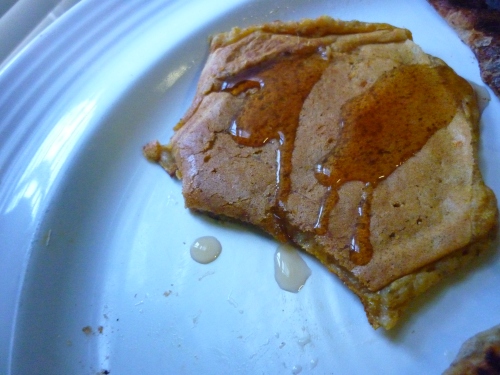 So sad that my namesake pancake mix didn’t live up to the hype I had built up in my head. Maybe some of their other products are better, but I wasn’t impressed with this one.

This entry was posted in Product Reviews and tagged breakfast, celiac, Gluten-free, pancakes. Bookmark the permalink.