The kids I used to nanny for would get in the minivan sometimes after I had been in there running errands alone.  The music would be bumpin’ and they’d go “Anna – were you havin a jam session in here?!”

Yesterday I had a real life jam session – strawberry style.

I thought to myself – strawberries are so cheap, and store-bought jam always has high fructose corn syrup in it – you should just make some jam yourself!  So I did…

I started with two pounds of strawberries from the fruit market. 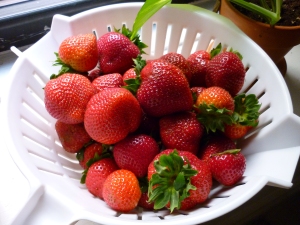 I hulled and rinsed them, then cut them into bite-sized pieces.  I put about 3/4 cups of sugar over them, along with about 3 T. of lemon juice, and put them in the fridge to marinate for about an hour.  Mind you, I had no idea what I was doing at this point – but I figured it would work out.

After that I put them in a pot and brought the mixture to a boil.  This is where things got sweet (literally ;)) 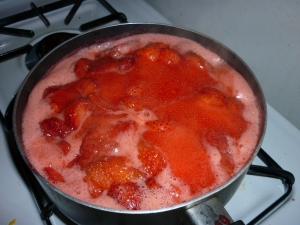 It almost boiled over a few times, but I lowered the heat and stirred it down.  After about 40 minutes it got to be much more viscous and lava-like… 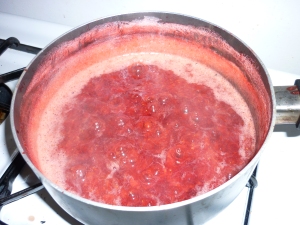 I let it sit and cool for awhile and then I had to have a taste.  So I put it on some of Udi’s bread, toasted, with butter: 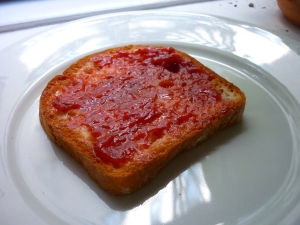 So good!  Not too sweet and just thick enough.  I put it in a leftover pasta sauce jar and have enough jam to last me a year!  (although I think it will only keep for about a week…)

So, lesson learned – don’t be afraid to have your own jam session.  And don’t buy into that Smuckers stuff 🙂

This entry was posted in Recipes and tagged Gluten-free, jam, strawberries. Bookmark the permalink.