Yesterday after work I had a doctor’s appointment, and knew that if I didn’t eat anything beforehand I would be one grumpy patient. Since I happen to work in the gf food desert that is downtown DC, I was struggling to come up with an option close to my office.

When I saw Zoup! I figured I would stop in and see if they had any gluten free soups on the menu. I used to love Zoup! (even if I do think it’s a little silly for them to have an exclamation point at the end of their name) because they always had unique flavors, and a cup of soup and hunk of break could fill me up for lunch. Now, of course, the situation is a bit different.

I asked the very nice man behind the counter if he could tell me what soups were gluten free that day. They already label their menu with DF (dairy free) and V (vegetarian) so it seems like they would be aware of which soups were also GF (gluten free).

He said the only one on the menu that day was the vegetarian split pea (with what sounded like certainty), which didn’t sound all that great to me, but after trying a sample I decided to get it anyway.

But then later in the night I looked at their gluten free menu on their website – the split pea is not on there! 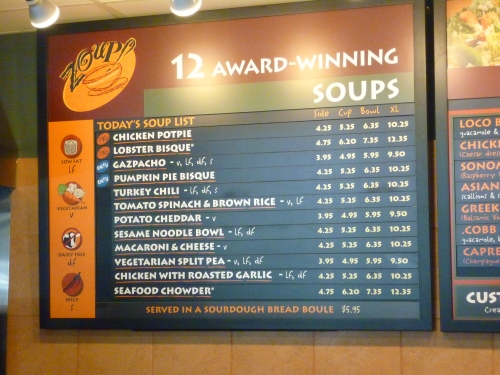 Bleh! Hidden gluten and misleading workers have done it again.

Luckily I’m not feeling awful, just tired and crampy, they probably only use a trace amount in that soup. Considering this experience, and the fact that it cost me $6.25 for a small soup and these gluten free veggie chips, I don’t think I’ll be back to Zoup! any time soon. 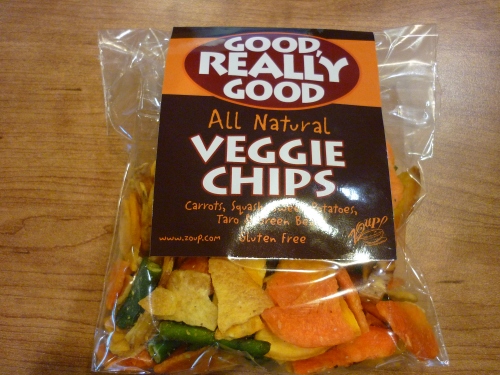 I sent a message to Zoup! on Twitter asking them to put a GF label on their in-store menus like they have for vegetarian and dairy free soup. But they just replied sending me back to the gluten free menu on their website. Which is great to have, but not when you’re in the store and your phone is dead and the staff gives you the wrong information.

Sigh… Next time I’ll be more careful. Or make my own darned soup. No exclamation point 🙂