Today Nick and I ventured up to the Astoria Market at the Bohemian Hall Beer Garden, which we only knew had “an eclectic assortment of wares” and some kind of food and drink.
Well, it certainly was…something.  Basically just an elementary school gym-sized room with about 30 vendor tables.  There were weird Christmas decorations, some cool jewelry, art, hand-made cards, and some gluten-free pumpkin chocolate-chip muffins!  I believe that the name of the vendor was Elsa-Joy Baked Goods, but I can’t seem to find any information on it anywhere online. Maybe they’ll post about it on their blog soon.

Even though the muffins were extremely, ridiculously over-priced at $3.50 for a very small muffin and $7 for a mini-loaf, I felt that I had to try one.  If not for any other reason than supporting gluten-free vendors! The only other food option was from The Chocolate Swirl, which had truffles that got my hopes up.  But they said that they weren’t gluten-free 😦

After making a pot of coffee, I dug in: 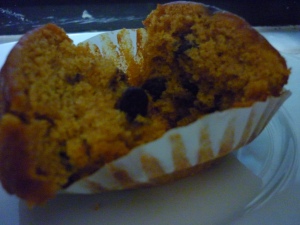 Soooo… it was good.  The best part was the sticky top and the big, rich chocolate chips.  I have been missing the richness of gluten-filled pumpkin bread – like the 440 calorie slice from Starbucks I used to get.  I remember it being so dense and filled with moist, pumpkin flavor.  This muffin was a little pumpkin-y, but not like I remembered.  I might have to challenge myself to make my own pumpkin bread before autumn is over.

Now I’m relaxing, and popped open a St. Peter’s Sorghum Ale.  The first time I had this beer was at Peculier Pub on Bleecker Street – and the second time was not the charm.  Maybe the first time I had it I was wooed by the cool bottle?

For some reason this beer tastes skunked to me.  It could be because I’m not used to drinking beer nowadays, but it just isn’t enjoyable for me.  I’ll stick with Redbridge from now on.

Yesterday I got my first real dose of Christmas in the city.  We went in to get some ingredients for dinner from Whole Foods, and a little present to send my dad (to make up for abandoning him on Thanksgiving).  But there was so much to see that we ended up making an afternoon of it.  Who can take a quick trip to the grocery store when you get off the train and see this view of Central Park? 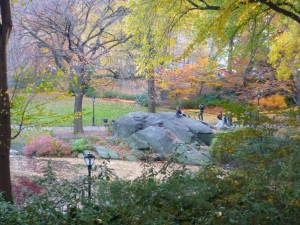 So we headed to Dean and Deluca to see if they had anything for my dad, and to give us an excuse to get coffee ourselves.  Usually I kind of hate going there a little bit, because they have all of the best baked goods in the city and I can’t have ANY of it.  So, being in the holiday spirit and all, I opted for the “Pumpkin Potion” made with soy milk.  It’s a blend of something pumpkin, and chai, and I think magic – because this thing was soooooo good.  It made Pumpkin Spice Lattes from Starbucks look like car wash hot chocolate (what? they didn’t serve hot chocolate at your car wash?)  It was incredibly frothy, and even though I’m not usually a fan of chai, the spiced and subtle pumpkin flavor was really amazing.  Almost made me not envy the line of people getting cupcakes and pastries.  Almost. 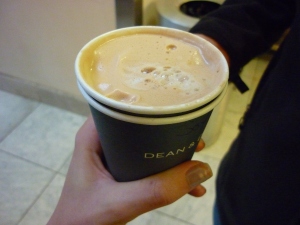 We also got a few of their Origin Chocolate bars, which didn’t make it home whole.  In our defense, it was a long subway ride.  Other gluten free food options at D&D include:

On the way there we saw the big tree getting prepped for the lighting in Rockefellar Center. Right now it looks like a construction zone, but soon it will be all gussied up and ready for Christmas. 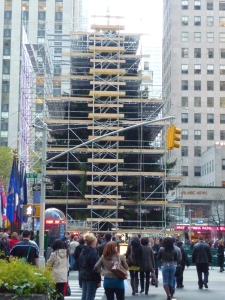 Apologies for those of you who can’t try the yummies at Dean and Deluca.  For those of you in the city – D&D moved to 48th Street a couple of months ago.  It’s much more discrete now (not even on Google Maps yet):

Or 560 Broadway (right outside the Prince Street subway)