Good gluten free veggie burgers are something that I’m still on the hunt for, since I can’t seem to find my old stand-by Franklin Farms burgers anywhere in DC.

Usually Amy’s products are reliable, so I was excited to see their “Bistro Burgers” in the freezer at Whole Foods. For $5.49 for a box, they’re not cheap, but also less expensive than some of the other veg burgers in the case. (Note to self: attempt to make veggie burgers in your new food processor).

The burgers had a lot of flavor to them, which is sometimes lacking in veggie burgers. They also crisped up really nicely on the stove. I brought one to work and just microwaved it, and it ended up just falling apart into a kind of floppy patty. That sounds really gross, but it didn’t taste bad, it was just messy to eat. It’s also kind of worth it since the burgers don’t have soy protein in them, but instead have natural ingredients like beans, brown rice, and tofu.

These are best served with some kind of sauce – I made a wrap with hummus and it was super tasty.

Some burgers I’ve had that are not so tasty?

Breaking News: Most people on a gluten free diet kind of think it sucks

I was reading this article on jacksonville.com by Mark Basch (The Gluten Free Glutton) about how “43 percent of people on a gluten-free diet rated their satisfaction as ‘poor’ or ‘very poor,’ with 35 percent rating it as ‘average.'” So that’s 78% of people on a gf diet that kind of think it sucks.

How sad is that?

Then I got to thinking about how I would rate my satisfaction with my diet.  And I think I’d say “above average”.  Or maybe “average”?  It’s such a weird question.

On the one hand, I still get to eat things like this massive Thanksgiving sandwich from Terri Vegetarian in NYC.  And I’m very satisfied.

But on the other, sometimes I have to buy the one gluten free veggie burger in the grocery store, which ends up tasting dry and looking like a dirt patty, and I have to slather it with hummus to make it edible.  Then? Not so satisfied. 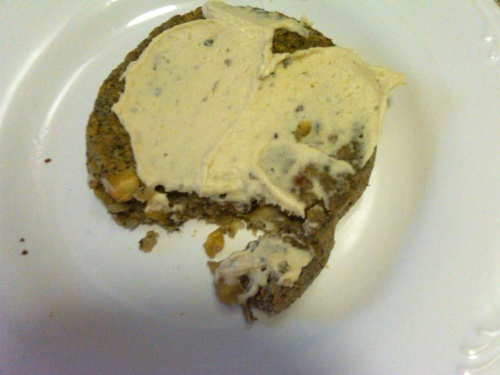 How would you rate your satisfaction with your gluten free diet?