DC Gluten Free News Round Up

1. Meridian Pint is hosting a Crispin Cider dinner on 12/4

I love me some hard cider. The chefs at Meridian Pint in Columbia Heights are going to be pairing five Crispin ciders, including the new Bourbon barrel-aged release “Bird On A Wire” (bring it on!), with gluten-free seasonal dishes like steamed bronzini with kaffir lime and lemongrass. Plus they’ll have lavender honey goat cheese cake for dessert.

I’ll be there, and you should come too! 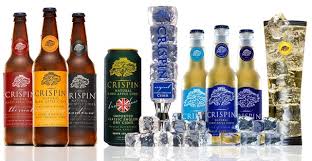 You can purchase tickets on Eventbrite here: http://www.eventbrite.com/event/4804647831

I’m all for spreading the gluten free love to every inch of the District, so I’m excited to see a new blogger who is providing rankings and reviews of restaurants in DC from a celiac’s perspective. Check her out at out Glutie Foodie!

Pick yourself up a walnut date bar or cookie at Columbia Heights Coffee from a new gluten free baker in town: The Gluten Free Muffin Man!

Anything else going on around this fair city that I should know about?

I’ve taken the plunge: I started a Facebook page! So often I’m out to eat, or just roaming around DC and I find great gluten free food that deserves to be shared! On the page I’ll be posting pictures and news specifically for my gluten free folks in the DC area. I’m excited to see what happens!

And thanks to my first two followers, Sue and Hope! 🙂

I’m not writing this post just because Emily, the baker/owner of Goldilocks Goodies, is the sweetest ever. I mean, it’s part of the reason. But she is also one of the only gluten free bakers in DC, so she would deserve a post even if I didn’t love her.

Or these herb flatbreads that I used to sop up some homemade soup.

Yesterday I picked up a slice of chocolate gingerbread made with candied ginger from her stand at the Columbia Heights Farmers Market (every Saturday from 9am-1pm until December 15th).

I’ve also had her cookies: chewy, simple, and addictive.

Find out where to buy her goodies in the DC area on her website.
Order online.
Find Goldilocks Goodies on Twitter.

This weekend I had brunch at the recently-opened Crios Modern Mexican in Dupont. Crios is the sister restaurant to one of my other favorite places for hangover brunch: Scion. It’s also conveniently located right next door in case you wanted to do some kind of brunch-crawl.

Our waiter was adorable, and also very knowledgable about what menu items were safe. How much of a relief would it be if you saw this on every menu you opened?

Nearly the entire menu is gluten free, but I went with the huevos rancheros and yucca fries. The waiter said that the chorizo and yucca hash was his favorite, so I think I’ll try that next time, only made with the soyrizo (which he confirmed is also gluten free and made in-house).

Yucca fries are so amazing. Soft, slightly sweet, salty and spicy. We ordered a second round for the table so we could continue to fuel ourselves through the flowing $13 bottomless mimosas. The huevos rancheros were spicy, cheesy, with a perfectly crispy tortilla bed.

If you’re into flan, they have coffee and coconut versions for dessert.

Pulpo: all you can eat and drink brunch

Last weekend I had an utterly delightful brunch at Pulpo in Cleveland Park. It was delightful for three major reasons:

After getting a mimosa in hand (you can choose unlimited bloody mary’s, mimosas, champagne, and I think mixed drinks or beer as well), I informed the waitress that I can’t have gluten. She didn’t even blink an eye – just assuredly said, “No problem,” and helped me choose a few dishes. It was so extraordinary to have a waitress who was confident in her ability to navigate the menu and answer any questions I had.

Pulpo is a Spanish tapas restaurant, so all of the plates are shareable. I started with patatas bravas with garlic aioli. Perfectly spiced, greasy in a good way, and there was a surprise red sauce in the bottom. Couldn’t stop eating this.

Then I ordered smoked salmon benedict. Really unique in that it’s served on a pile of soft rice, which was almost at a thick risotto-like consistency. Then the egg yolk and hollandaise mix with it and makes it really rich.

To round out the meal we ordered some grilled podran peppers. These were also served at Churchkey when I was there last, so I’m declaring them the new “it” pepper.

I left with a full belly and it was worth way more than the $25 for this brunch. The laid back atmosphere, stellar service, and gluten free-friendly food will definitely bring me back here often!

DC Gluten Free News Round Up

After a glorious Michigan victory over Michigan State this weekend, I headed to Bier Baron in Dupont for a gluten free beer. Watching your friends drink beer all day at a bar while you have mixed drinks can sure make a girl thirsty!

I was psyched to see that Bier Baron now has Omission pale ale on their menu. However, they were out when I went 😦

But, our awesome waiter was kind enough to bring me all three of the other gluten free beers they have, on the house! After passing them around the table, my friends confirmed that the New Planet Off Grid is kind of funky. I’ve never been a fan of New Grist, but when you have them side-by-side, it actually tastes quite like the St. Peter’s (both are sorghum based and light beers, so it makes sense).

Even though I live about a five minute walk from Vace Italian Deli, I only went in once before since I only ever saw people buying pizza there. A reader tipped me off (thanks, Fede!) that they have a bunch of authentic Italian pastas that are gluten free!

They have corn riccioli, rice gigli, and one pasta made with squid ink (plus the naturally gluten free risotto). Pair one of these with a homemade sauce (they carry them fresh and frozen), and you’ve got yourself a meal! One more win for my neighborhood!

3. The Maryland crab soup at Clyde’s is gluten free

I went to the last game in the NLDS series (heartbreaker), and was freezing cold and standing up for about six hours. So when I got to Clyde’s in Chinatown and found out that their Maryland crab soup is gluten free, I was overjoyed. Two bowls later and I was feeling slightly better about the Nats losing, and much warmer.

Just a few things happening around this great city in the gluten free realm!

Gluten free at the gay bar

Nellie’s Sports Bar is best known around DC for their weekly drag brunch. They also happen to have great happy hour specials and (most importantly) gluten free arepas!

They offer a bunch of things that you can fill the arepa with, I chose scrambled eggs and avocado, with sour cream, pico de gallo, and black beans on the side.

A gay bar may not be the most likely place to find a delicious and affordable gluten free meal, but I will definitely be back to try some other fillings and take advantage of their cheap drinks!

Have you found gluten free food in any unlikely locations?

It seems like when it rains, it pours when it comes to new gluten free finds in this city. Here are a few things to check out!

1. Churchkey and Birch and Barley are getting gluten free flatbreads

They already have the best gluten free (and general) beer selection in DC, and now they’re going to be introducing gluten free flatbreads to their menu.They already had gluten free chickpea crackers, but this is taking it to a whole new level. I always salivated over the regular flatbread options on their menu and now I actually get to try one!

Chefs prepping the gfree dough, via the Churchkey Facebook page:

2. The Protein Bar will be opening on Wednesday at 7th and D

This place serves healthy, high protein meals, many of which are gluten free! The amount of quinoa on their menu makes my heart do a happy dance. They also have a full allergen guide to refer to.

The Almond Berry Bowl, Black Bean Fiest Bowl, Vegan Quinoa Chili, and Superfood Vegan Salad are on my to-eat list. All of their blended protein drinks are also gluten free, and will make a nice substitute when I get one of those intense frappuccino cravings.

I don’t know why I keep ordering broccolini – it’s bitter and ruins everything it comes in contact with. I ended up picking it off of my pizza, but loved the rest of it! Pete’s also has delicious gluten free pasta that I sampled at the DC Gluten Free Food Expo.

Anything else going on in the district that I should know about?

June 15th was the DC Gluten Free Expo – an event I’d been looking forward to for months. And it didn’t disappoint! There were so many samples and new products, not to mention the great feeling of being in a room where I didn’t have to worry about what I could or couldn’t eat! Meeting members of the gluten free community and talking about our favorite foods was so much fun.

Some of my favorites were the peanut butter and jelly cookies from Wildfire in McClean, VA (they also have a great gluten free menu, and a Gluten Free Wine Dinner event coming up on Tuesday!)

I also loved the lemon curd cakes from The Happy Tart, a new gluten free bakery in Alexandria, VA. There was a thin layer of white chocolate on the bottom, moist cake, and creamy lemon filling. Even though I’m usually more of a chocolate dessert person, if I was getting married this would definitely be on the menu.

And these chocolate chip cookies from 1-2-3 Gluten Free were the best I’ve ever had. Thick, buttery, chewy, and brown-sugary.

Here are some more pics of the goodies featured at the expo!

Going out to breakfast or brunch can be a challenge for celiacs. French toast, pancakes, English muffins – gluten seems to be the star of the show in most dishes. Nine times out of 10 I end up eating an omelette or some kind of eggs, which is mostly okay with me. Except for the fact that they usually come with hash browns or home fries, and I’m always skeptical of how they are made (they could be fried, put on a griddle next to the toast, come from a mix that has them coated in flour, etc.)

So when a restaurant has grits on the menu, they are always my go-to substitute. They’re creamy, cheesy, buttery, and good ole’ Southern cookin’.

These are my top three restaurants for grits that I’ve found in DC yet.

Seriously amazing cheese grits. They’re like a finer, condensed macaroni and cheese.This isn’t the most colorful plate in the world, but so delicious.

Nice and cheesy, just how I like ’em. These come with big pieces of cheddar on top. Try them with the smoked salmon omelette.

I only had a taste of my friend’s grits here as a part of their shrimp and grits dish at dinner, but they serve them as a side dish at brunch as well. If Art Smith can’t make a good pot of grits, then I don’t know who can.

Any places I’m missing for good grits? Or anything else you substitute for toast while eating breakfast out?